Pat Smith, Dorking U3A’s publicity officer, is cycling around the UK. Here’s her diary of the second part, the ‘easy’ bit (you can read about the first part here)

To cycle from Dorking to the Isles of Scilly, visiting the island of St Agnes, which is the furthest point south of the UK. I’d take five weeks and camp most of the time. I couldn’t post blogs as my netbook was too heavy and I never knew where I’d be able to charge batteries. Instead I kept a diary…

I’d intended to leave on Monday but had to finish the shawl I was knitting for my latest grandchild. It was large – 243 stitches to a row – and on the previous Thursday I realised I’d made a huge mistake so had to undo over 30 rows. Do the maths and shudder in sympathy.

I finished by Tuesday afternoon and set off on Wednesday.

I’d carefully planned the first day which involved cycling around 60 hilly miles to somewhere near Winchester. However, I was two days late leaving, I couldn’t find any suitable campsites, I had to reach Penzance to catch the ferry to the Isles of Scilly in seven days – and it was raining hard.

Salisbury Cathedral had been invaded by giant hares – and strange creatures

The train to Salisbury was fast, warm and comfortable. But Salisbury Cathedral had been invaded by giant hares and strange creatures.

Despite this I enjoyed a cream tea. 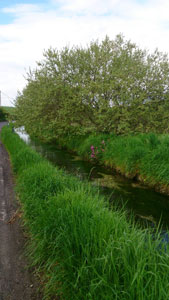 Cycling out of Salisbury was horrible, up a steep hill with no path and lorries grating gears behind me. Luckily it didn’t last long and I was able to spin along undulating, deserted by-roads as the sun came out.

My campsite was at Sixpenny Handley, a small and beautiful village. Posters were advertising their Waistcoat Festival on the next weekend. Why waistcoats? ‘The village was destroyed by fire in 1892 and people around were so generous with donating clothes to the inhabitants that villagers would wear two or even three waistcoats.’

‘Will everyone at the festival wear them?’ I asked.

‘Why not stay and see – we have a few vacant pitches,’ he suggested, but I had to move on.

Later that evening I had a migraine. Bands of flashing lights wriggled across my vision and I knew that within 30 minutes I would be immobilised with pain. Nothing for it but to ignore the beautiful village, take painkillers and crawl into my sleeping bag. By 8pm I was asleep. 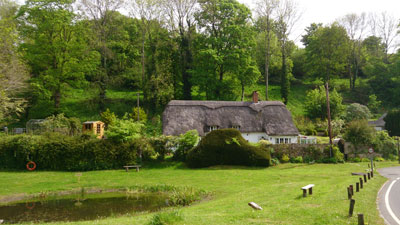 … through the best of English countryside

I woke feeling groggy but at least the sun was shining. ‘Just get started,’ I told myself, so packed up and pedalled slowly off. 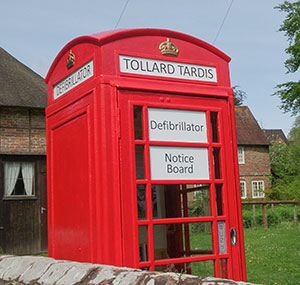 The ride was delightful, along winding lanes through the best of English countryside with thatched cottages, ducks swimming on ponds and a remote crossroads with a most wonderful bright-red phone box housing a small library and defibrillator unit. Though Dr Who was clearly saving the universe somewhere far from here.

But I walked up most hills with the vitality of a squashed peanut.

I stopped for a pub lunch. Two hours later I was still there, drooping. Should I stay at their B&B? But it wasn’t yet 2pm, a room would cost an eye-watering £70 and the nearest campsite was only 10 miles away. 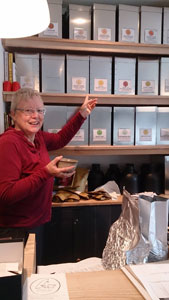 I stopped at Sutton Courtenay looking for food. It’s a beautiful old town but with a major traffic problem and a sad lack of teashops. Instead I found a seller of Japanese teas and ended up eating pork dumplings and drinking Sencha Karigane green tea.

Naturally I got lost but found the site eventually. It was closed. I phoned the owner. ‘You should have phoned before you came,’ he said. ‘I’m off on my honeymoon tomorrow. But as you’re only one person and on a bike, I’ll pop round and let you in. I can’t turn on water though.’

‘That’s OK, I have Wet Wipes,’ I said. Anything to get my head down and sleep.

He arrived, showed me how to lock the gate after me in the morning and said I could sleep inside the building if I didn’t want to pitch a tent.

Bliss! I slept for 11 hours, vaguely aware that rain was blasting the roof, but I was safe and warm.

I have a 90-year-old aunt who lives in Chard, Somerset, and I’d promised to visit her if I could. It was out of my way but it didn’t matter. I left the campsite at 9am feeling much better and the day stretched in front of me. ‘I’ll be with you around three,’ I said and set off.

Undulating hills were easy to ride, roads quiet and I made excellent time until I got lost. And cows got in the way. ‘I’ll be half an hour late,’ I told her.

‘Lemon drizzle cake is waiting for you.’

Almost as she spoke, the terrain changed. I was south of Crewkerne and the hills rose in front of me – so did the wind, which was strong and in my face. A few drops of rain added to the drama.

‘I’m really sorry, I won’t be able to make it until four.’

‘Look, Pat, it’s getting late and I need to be preparing my dinner. Perhaps we’d better call it a day.’

Ah well – at least I didn’t have to hurry any more. I stopped in the middle of nowhere and sat on a stone, spreading out maps to decide where to go next. A horse trotted past, then two jogging ladies. Then a woman with three large dogs who sniffed my maps with great interest.

My campsite was remote and beautiful and I pitched in a small woodland glade, out of the increasing wind. 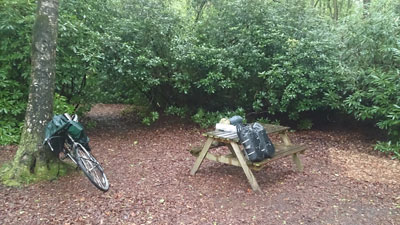 Out of the wind

Rain started to fall and my Accuweather app predicted heavy rain for tomorrow.

‘I’ll stay here and visit Forde Abbey. That’ll keep me out of the weather.’ Forde Abbey is a stately home built around the ruins of a 900-year-old Cistercian monastery with beautiful gardens and an excellent tearoom. It also does weddings, so the building was closed to the public on Saturdays.

Another early night – 8.30 this time. During the night rain beat against my tent. It’s lovely to lie safe and warm, knowing that the elements are bashing away outside. But then comes the moment when you have to pull yourself out of the tent and get on with the day. Especially if it’s still raining. 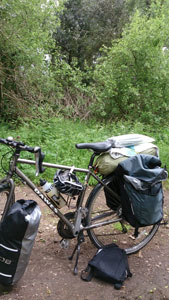 Packing in the rain

Packing up a soggy tent is a miserable and muddy business, especially when the tent is covered with tiny pieces of twig and leaf, but by 10am I was on the road, encased in waterproofs and very glad of my top-of-the-range jacket bought for an eye-watering price in Limerick.

I went through Chard Junction and the place suited my mood. The station closed in 1966; nearby Dairy Crest followed suit in 2013 and its Victorian red-brick buildings are fenced off, with large ‘Keep out. Demolition in Progress’ signs.

‘Positive thinking, Patricia,’ I told myself, but it rained as I pedalled then walked uphill; it rained as I sped down the hills. Wayside flowers drooped and rain dripped from trees. Mist covered the landscape and at times I cycled through cloud. Cold cloud. 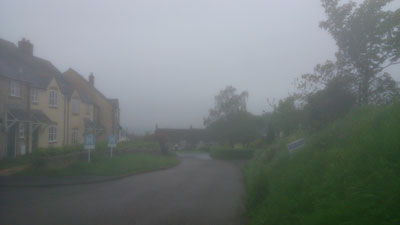 ‘Time for a warm-up,’ I thought as I came into Hawkchurch – well named as it stood at the top of a steep hill. Their village shop was a community enterprise, in a Portacabin, but they sold hot chocolate and their welcome was as warm as the drink. 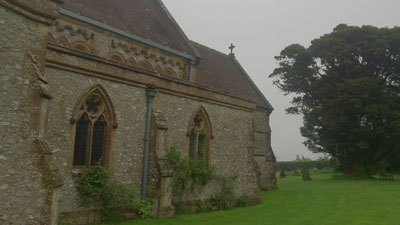 St John the Baptist, Hawkchurch – a church to be proud of

It was indeed beautiful, with intricate stonework and jewel-coloured stained glass, but I wasn’t alone.

‘Do you mind if I practise my reading?’ said an elderly lady standing at the lectern.

‘Of course not.’ I stood and listened, then we chatted. She and her husband had been doctors, working abroad in the Kalahari Desert, then Bucharest.

‘Come to the pub for a glass of wine,’ she said after a while. ‘Villagers turn up on Saturdays if they feel like it, for a drink and a meal.’

An hour later, having refused a third glass of wine, lunch and an offer to put me up for the night, I was on my way, wobbling slightly but feeling warm and cheerful.

Cycle to Exeter? In all this rain? 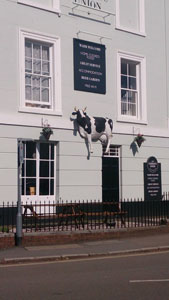 The Farmers’ Union – you can’t miss it

Axminster had a station with a café. Their poached egg and haddock was delicious and the train journey delightful. All those hills I didn’t have to climb. All that rain I didn’t have to endure.

I booked a cheap hotel as there were no campsites near by, strangely named as ‘The Farmers’ Union’. ‘Just look for the cow,’ the receptionist told me when I phoned. ‘You won’t miss it.’

Sure enough, a plaster black and white cow with large horns hung outside the building, staring balefully at traffic-lights.

‘The hotel used to be exactly what it says,’ the landlord told me as we walked Milly around to the back yard. ‘Then it was sold and at various times it was a casino, then a lap-dancing joint. We’re far more respectable now, though you wouldn’t think so by the way some people behave.’ He pointed at a plaster statue of ‘cow-dressed-as-human’, balanced on two legs and smiling invitingly in a corner of the yard. ‘A group of students snapped off the horns – look! But they won’t be back in a hurry.’

My room was small but had an en suite shower. Not for me – yet. I pulled out the tent and showered each part of it, let it drip for a while, dried it with one of the two room towels then spread it over doors and radiators to dry, hoping that room service would ignore me.

The big question – to cycle over Dartmoor in the rain or stay in Exeter, go to a cathedral service, have a good lunch then wander along the riverside? 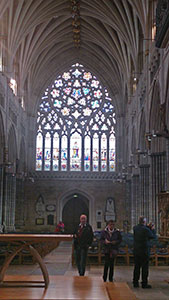 Matins started quietly with a single voice echoing against the dim gothic arches and jewel-coloured windows. The sound was taken up by the rest of the choir, whose harmonies blended in music that had been sung there for centuries. I counted the choristers as they walked past – 12 men and 17 pony-tailed girls. What had they done to the boys?

The service was inspiring and beautiful and I joined a guided tour of the cathedral afterwards feeling serene – and dry.

I found a small, half-beamed restaurant overlooking the cathedral and celebrated a tiny speckle of blue sky by drinking a glass of wine. By the time I’d finished the speckle had become a slash, then suddenly the clouds were in retreat, the sun was warm and Exeter opened its arms to summer. 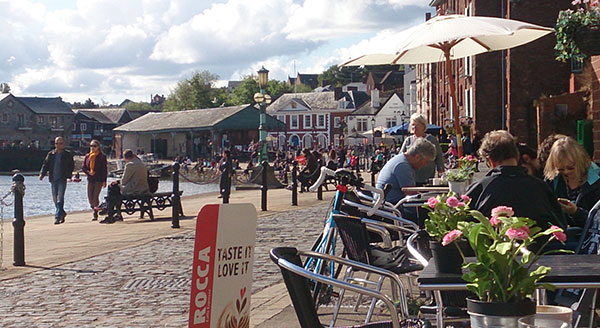 Exeter opened its arms to summer 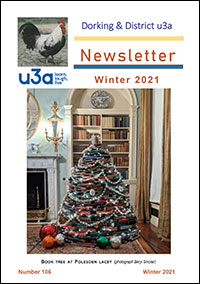