The Days Out Committee picked a winner with the outing to Frogmore House, near Windsor, which opens for only a few charity days each year, writes Jenny Ford

The first trip arranged by the new Days Out Committee was a great success. The storm of the day before had blown itself out leaving a gentle wind which added life and movement to the garden. The early start gave us plenty of time for coffee and to orientate ourselves. We then gathered under an Indian bean tree for a guided walk around the grounds, which are in the picturesque style – a sort of halfway house between Capability Brown’s grand landscapes and enclosed formal parterre gardens.

There were few flower beds but mainly magnificent trees and shrubs, including two tulip trees with their charming cup-and-saucer flowers, all set around a beautiful lake. Our guide, Glenda, battling against the twin evils of aeroplanes and a motor mower, explained that the house, which came into the Royal Family in 1792, has been mainly used by them for relaxation and entertaining. Indeed, the Queen walks in the gardens with her dogs most weekends when she is at Windsor Castle.

The Victoria and Albert Mausoleum was closed for refurbishment but we were shown pictures of the highly decorated interior. The other mausoleum in the grounds was erected by Queen Victoria in memory of her mother, the Duchess of Kent, who also lived in the house for the last 20 years of her life.

After lunch we were free to wander through the house, where there was plenty of information. Each room had been furnished and decorated in the prevailing fashion of the day of each queen who owned it. Queen Charlotte, consort of George III, was the first owner and her rooms reflected the light, uncluttered Georgian style. The Duchess of Kent’s rooms were beautifully arranged with pretty colours and interesting artefacts, but the rooms reflecting Queen Victoria’s taste mainly centred on family portraits and marble busts of her numerous children. By the time we reached Queen Mary, who favoured black papier-mâché and lacquer and had a curious passion for boxes, we were beginning to feel pity for the poor maids who had to dust all this. There were, however, some wonderful examples of flower paintings by talented artists and also by various princesses in the family.

Although this is a female house, the surprise at the end was a room devised and arranged by the Duke of Edinburgh to commemorate the Royal Yacht Britannia. The Queen is known to have loved the ship, so it was a nice touch for him to have done this for her.

We were sorry that Sue Willis was unable to accompany us, but Sheila Knight was an admirable leader and we all enjoyed the day. 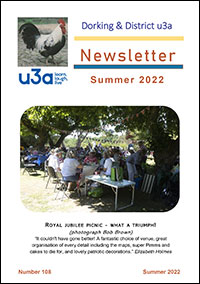